Posted by clarkythecruelmkkmmmm on May 20, 2018 in Pendragon

With the revelations of the substitution of Baroness Middlewhich by their liege King Rhyons of Norgales there was much discussion in the councils of Chester on how to proceed. A feint few could not see how they could split from Rhyons. Others saw to give him chance to make amends or else. Others to stand aside in the conflict with Sugales and some radicals even to throw in with the Southerners.

Eventually a compromise of sorts was reached. Though the stresses were starting to tell on the Dux. Sir Gato and Renault went to King Rhyons to put him on notice and if he made no compensation for his infamy Cheshire would allow Sugales and it’s allies free passage to attach Norgales. Hannibal and Sir Gilmere the new Baron Middlewhich traveled to secure agreement and fair terms with Sugales and plain speaking Sir Spurius was sent to speak to King Leogandance of Cameliard.

Sir Gato and Sir Renauld (who is also Rhyons son in law) together with Squires Adeon and Neddig bearded the Giant in his den at Dinas Bran. Confronted by the cannibal and gommorahan Court the King reveals that he had the skinless body of the Baroness Middlewhich pickled by revealing the jar and that he as been gnawing on her leg throughout the interview. He sends them of with his scorn and her body.

King Belisans of Sugales jumped at the chance but King Leogandance would never be a friend of Cheshire accusing Cheshire of Cowardice and treachery in Uthers time making the player knights wonder ‘ are we the baddies ?’

Meanwhile ships from King Lot of Orkney, cousin of Rhyons arrive and Lot’s herald Cameron threatens Cheshire with the might of Orkney and Lothian if Cheshire bretrays Norgales. They also demand custody of mad King Pellinore. Sir Anerin and Sir Piran leading the negotiations notice Brother Errin, Anerin’s cousin failed squire and frustrated Bishop candidate smirking during the stand off.

Reunited the chivalry of Cheshire is united in rage at the new revelations of the depths of Rhyon’s perfidy and all agree on a truce with Sugales and blessings upon their efforts to take Rhyon’s head. The cheers of unity are cut of by Merlin’s unexpected entrance. Ranting of betrayal of prophecy by this rebellion he warns of grave consequences and a curse on Cheshire and storms off . Sir Anerin and Sir Piran ride out to dissuade him but find him waste deep in the Dee which he turns blood red for the rest of the year promising the rest of the curses of Moses upon Egypt will fall upon Cheshire.

Cameron is sent off with a flea in his ear. Sir Anerin reports his suspicions to the Dux and is asked ‘ who will rid me of this troublesome priest ?’ He follows the cowardly cleric out to Parkgate and drowns traitor and his cousin – he is nearly witnessed by peasants but disguises it as a drunken boating accident (or so he thinks.)

Sir Renauld has a Frank discussion with his wife Blonwed offering to set her free if Chester fights with her father Rhyon’s. She confesses only Renauld has only shown has kindness and whatever comes she shall stay at his side.

Baron Middlewhich, Sir Renauld and Squires Adeon & Wyatt sailed for Mann to obtain Orkney neutrality. There rather than a diplomatic mission they found a invasion fleet raping and ravaging that gave chase. Clearly part of Rhyon’s security.

Belisans’ forces behaved well through Cheshire and he even detached forced to ensure Cameliard. However his invasion got brought into Norgales surrounded and then devastated by combined Orkney / Norgales forced limps back Chester. 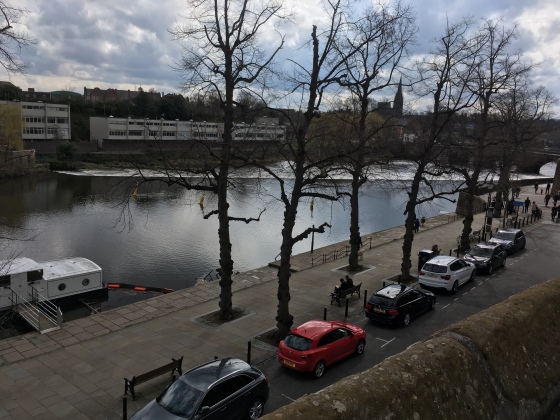 While Dux Randle twists and panics as a Norgales-Orkney horde gathers outside the walls of Chester his knights do not. Many including all the player knights but for Renault (cousin if the Duxess and son in law of Rhyon’s ) ride out to fight with the men of Sugales rather than stay neural and be thrown on Rhyon’s mercy should be win. This insubordination becomes near absolute when Sir Piran finds men of Chester tried to abduct or kill Pellinore to state the Norgales alliance, resigns his knighthood and challenges the Dux to a duel. Tragically Renauld Sir Pirans former mentor has to act as champion but the duel is delayed till battle is joined – where Sir Piran his Cornish blood still hot in Pellinore’s livery challenges King Rhyons a half giant to single combat.

As both Armies stand paused Piran strikes early cutting into the forearm of the King Rhyons. A contemptuous  backhand by the royal axe flips Piran off balance and a follow on chop cuts deep as Piran narrowly dodges by backstepping,  being cleaved in two.

As the follow through cuts deep into the ground Piran darts forward cutting around the giants ears glancing off his helm but producing torrents of thick blood.

“ I’ll have no shave today” snarls the King and thrusts forward with both shield and axe sending Piran flying backwards and into unconsciousness. As he approaches there is a cry from the Cheshire and Sugales ranks.

Mathuin is charging forward screaming insults lance held too loose and shield too high.  Meanwhile the Kibbo kift under Gato are manoeuvring to cover the recovery of Piran. By more luck than judgement Mathuin’s lance strikes the incredulous King full in the gut – entangled he swings smashing through the Squire’s shield and sending him in a spray of blood somersaulting off his horse looking close to death.

A third rider bares down on the King. No cries or cheers. This is sober man of terrible aspect who has experienced terrible things. Baron Middlewhich (having crit’d his love of family) merely charges straight. The King sidesteps and cleaves the Barons horse’s legs from its body – as the Baron roll’s free he chuckles.

“ shall I feast on all your clan today? “

However the gore on the axe means with his next blow he loses his axe – the Baron steps within his shields and strikes his sword up – up into the very scar where Gato operated to save Rhyon’s life 6 years prior where the giants hide is weak – and strikes with all his might. The sword passes through gullet,pallet and brain and Rhyons – terror of Wales falls back dead.

Baron Middlewhich picks up the Kings axe and staggering under the weight brings it down in a chop on the fallen king. Standing on the giants barrel chest, holding the skull aloft like a crown as it rains ichor upon him he cries.

“ HERE IS THE FATE OF BULLIES AND BRETRAYERS !

THE HOUSE OF MIDDLEWHICH IS AVENGED !

BE WARNED ALL ENEMIES OF CHESTER ! “

The Kings Guard charging the Kibbo Kift stop. Black Ravens rise from behind the Norgales Army and flee towards Dinas Bran. At first slowly but then quickly the army disbands. With Rhyons gone no body knows how is King of Norgales and the Crown of Orovices could appear anywhere – the component parts of Rhyons army must protest themselves against each other.

Both Piran and Mathuin can get sufficient medical attention to save their lives – Belinans will spare nothing on their care.

Sir Gato and Sir Anerin ride off pursuing the Orkney men with a detachment of Kibbo kift – in a battle that is worse for the Cheshire men Anerin does best abs capture Cameron.

All these events strain the Dux that in despair tried to take his own life throwing himself from the battlements – only to be saved by Squire Adeon and Sir Renauld. Baron Middlewhich seeing the pathetic creature he has become is moved to mercy.

Dux Randle without issue resigns to live in Sir Renaulds increasingly crowded house and in the manner of their Roman ancestors the Cesterians elect a new Dux. Baron Middlewhich withdraws from the contests, Baron Cheadle Hulme wins standing on a platform of Christian and Roman values beating by 1 vote the youth protest vote for Sir Piran who never formally stood (though Sir Gato carefully campaigned for him.) the new Dux taking the name Brutus returns Pirans title and lands to him.

Chester goes into the winter battered but feeling hope – many of the common people but their salvation down to ‘Saint Errin’ whose drowned body was presumed to be a Orkney sin. Sir Hannibal organised a drunken hunt and eyes turn hopefully to the future. King Belisans may even have a match for Sir Gato.

Perhaps the future isn’t so hopeful…