Lunchtime Lairs 9b: … if Herrings be adventure put a penguin in my backpack

Posted by clarkythecruel on June 20, 2018 in lunchtime lairs

Lunchtime Lairs is a Wednesday lunchtime Jane in Liverpool city centre at the premises of the excellent Justplay games 12-2 every week – come and join us. We are currently playing Blackhack.

Farquhar and Seneca collapse outside the dragons lair but there is no time for complacency as a Grizzly Bear drawn by the smell of the wizards seeping entrails approaches. Combat ensues and things are going pretty bad till Thoth the Cleric of Freya last seen when the tree fell arrived and sees it off with his deadly sling shots.

Much like Seneca Thoth has tracked the party and the three friends decide to venture back into the Dragon’s lair.

There they find the entrance guarded by the now animated giant penguin and dinosaur skeleton. While Thoth uses his turn undead to banish the very canine behaving T Rex skeleton to the far side of the treasure mound Farquhar and Seneca begin conversation with the giant penguin.

Obviously a giant penguin cannot talk – that would be silly ! But it is bright enough to give one swark for yes and two for no and even scratch small sentences. Through this communication they establish

Blinding the avian Goliath with Farquhar’s mirror they slip into the lair and find a giant fish shaped biscuit that says ‘eat me’ – the Penguin eats it and shrinks to normal Emperor Penguin size but still under a geas to attack them. Despite the embarrassment of Farqhaur nearly being killed by a penguin they knock it out and bind it. They also loot the mound of gems, gold and a sword.

Farqhaue also kept a small piece of the biscuit and took the Penguin in a backpack.

They’re about to leave when Thoth goes back for healing potion despite the sound of dragon roars. The dragon arrives and belches fire. The party escapes but Farquhar goes to zero hit points and wakes with cracked ribs. The healing potion just puts him back where he started.

After some wondering and an overnight stay in the caves the continued to travel down into the underworld. They meet underground river and Farquhar releases the Penguin which with its brain back to normal Penguin size has normal penguin intelligence and pops down the river. 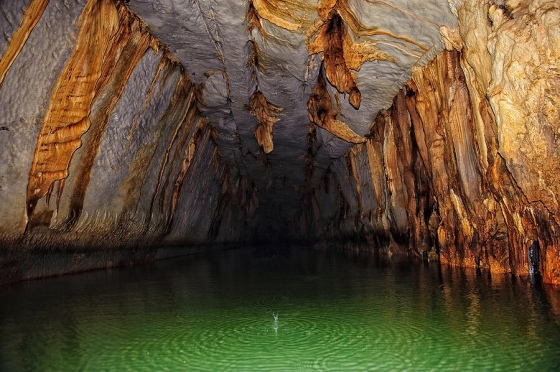 They find a canal (who left it? What of Hector ? ) and give chase. They loose the Penguin but find a underground lake with islands. One of which has a healthy colony of penguins.

Landing abs investigating they notice a cylinder at a strange angle at the summit of the island. Seneca and Thoth climb up and climb inside the cylinder.

There they find 6 tanks five of which have ‘brainy’ like brains. There are also 8 tables 7 of which have surgically altered penguins with humanoid features and ruby collars fitted. The inside of the cylinder has strange gem like lights covered in symbols like the inside of Brainy’s tanks. 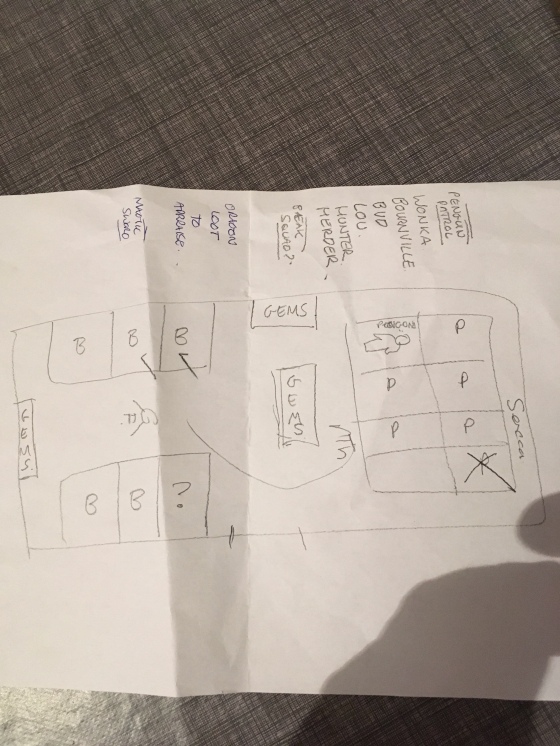 Farquhar plays with these producing a roar which unsettled the cylinder. This disturbs the brains which start to clamber from their tanks so the party quickly produces a plan and acts.

The Wizard sprinkles his remaining shrinking biscuit in the brain tanks – slightly misjudging things and only shrinking two before he ran out. Meanwhile Seneca and Thoth took the collars off the waking Penguins who hated the Brains for cursing them with intelligence and their mutant form. Using his charisma Seneca leads them to attack the Brains saving the day.

Unable to join their flock the Penguins decide to join the party who they see as gods (that won’t last) – the party name them Wonka, Bournville, Hunter, Herder, Lou and Bud.

← Flashing blades 1624: an Ambassadors Tales: Diplomatic Immunity
Lunchtime Lairs 10ab: Out of the frying pan into the slave pen →

4 comments on “Lunchtime Lairs 9b: … if Herrings be adventure put a penguin in my backpack”