Posted by clarkythecruelmkkmmmm on February 5, 2019 in pink gins & googlies

As four ladies of the Cranford Ladies College Old Girl XI Empire &amp; America Touring Team on route their next match to Singapore:

promenade on the deck of the SS Charlotte Rose flagship liner of the Onedin line, they noticed a speck in the sky.

A strange futuristic (for 1924) monoplane circling around the ship in red, blue, white and gold.

Shortly afterward a trio of aggressive stubby planes flit around the liner.

Hettie looks up and spots a dark dirigible shape in the clouds above and two small planes buzz around signalling by Aldi’s lamp for the ship to stop. 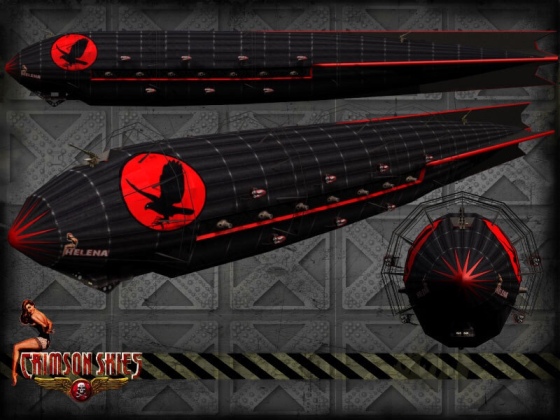 Captain Fairweather differs but the trio of ‘fighters’ fire death-rays into the sea across the bow of the ship from the nose of the planes. The crew decide to surrender.

Meg goes to the radio room – finding the radio jammed she struggles to unjam the blocks. The others see the zeppelin glide down and uniformed troops rappel down on to the deck where the Charlotte Rose crew have been told to assemble the passengers.

Meg’s manages to get through to the Royal Navy’s Mandalay station who agree to send a floatplane to investigate before the landing marines break the radio.

On deck the girls Megs, Mavis, Hettie and Edith confront the Major of the Marines Jean-David Nau. He’s a very cordial pirate and forms they into a tea committee and sends them off with guards to get refreshments.

They take this opportunity to grill the guards – they appear to be from all round the world but speak Arab inflected Corsican accented French. Major Nau explains they’ll be temporarily detained as a matter of planetary security as the ‘Rose is taken to a mist shrouded island and docked with a Dutch and French ship.

Meeting the crew and passengers of these ships in the prison blocks – they find the Dutch ship has Egyptian artefacts and the French scientific equipment. Studying the volcano dotted island they spot a blue dome in the middle where the zeppelin ( the chaudron bouillonnant) is tethered.

They resolve to escape and investigate but having had tea Meg’s becomes lethargic – Edith has to develop an antidote out of nail varnish and shaving foam and the adventure is back on.

Sneaking through searchlights Edith is neatly spotted but Mavis pulls her to ground and they scramble under the wire. They pass a cafe which as well as marines they see another uniformed types:

Gliding past the cottage of revellers and clambering up the middle volcano they examine the Dome. It has a pair of helmeted sentries on the door but there is a cable connection for cargo and a cargo hatch they managed to pick open and sneak in. Inside the volcano moth is surrounded by Egyptian artefacts and French scientific devices wired up to displays eerily similar to the interfaces of Doctor Vulcan.

They hear one of a flamboyantly uniformed ones of obvious high rank speaking to various white coated boffins. Phrases caught were ‘ when the American ship comes in which should have the final piece’ to ‘open the portal’ and that it should be ‘ one in the eye for project deadelus.’

Who are the francophone sky pirates ? Are they goodies and babies ? What is the Egyptian connection ? Where does dr Vulcan fit in ? These and other questions may be answered next time we play …