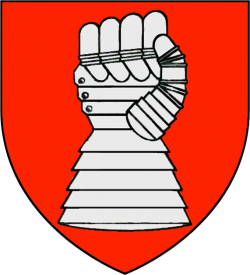 Mailed Fist of the Chair of Guildmasters

North of D’elan is the guildocracy of Dunloch. It is ruled by a Grand Council of Guildmasters, who are elected by various different means depending in the particular guild – it varies from block votes, secret ballots, open hustings and more. The economic fall of Dunloch has led to factions forming  between the Guilds. Reforming Guilds (the Weavers and Millers in the lead) who favour protectionism and a wider electorate opposed by the Conservatives (the Merchants, Goldsmiths, Masons etc;) who still support free trade and elitism  (though they call it meritocracy.)

Dunloch’s religious tolerance attracts dissents and heretics from across Ancienia who ignored in the days of prosperity are now attracting converts and sowing the seeds of disorder.  Republican exiles from Norvakan, a rump of Dunloch monarchists and ethnic tension further complicate Dunloch politics.

The Chair of the Grand Council Je Je Hormagson of the Merchant’s Guild is an arch-conservative. His bloated body hides an industrious and nimble political mind  and an intuitive realpolitik which has saved the Guildocracy from her belligerent feudal neighbours keeping good relations with Norvakan (both Kingdom, Republic and Junta) and Untenburg. His protection of yesyanolan fugitives and pirates have angered King Juan but he has not yet taken action.

A peasant leader Lamberant ‘the tongue’ a great orator and charismatic leader was hung out to dry by his reforming guild allies and languishes under house arrest. His supporters are getting frustrated and starting to lean towards violence rather than his tactics of boycott.

Each guildmember and journeyman is required to serve in their guild militia in which political leaders (chapter guildmasters etc;) fulfil the equivalent military role.   Equipment and role vary and are the choice of the particular guild. A guild symbol is shown on the shield or militia tabard.

Because guild members buy their own kit and because of the lack of experience the militias are frequently equipped with archaic equipment.

Apothecary carry daggers – assigned to other militias by the grand council.

Cartographers sword and shield – assigned to other militias by the grand council.

Cook dagger – assigned to other militias by the grand council.

Courtesan dagger-  assigned to other militias by the grand council.

Gladiator as per their arena arms and armour – assigned to other militias by the ground council as ‘spine’.

Gunsmith long arm and/or part of a cannon crew and rapiers.

Harper/Minstrel assigned to other militias by the ground council as signalers.

Physician dagger – assigned to other militias by the grand council.

Pilot Cutlass – part of the ‘navy’

Scribe as unit assigned to by the Grand Council

Teamster form supply chain armed with shortbow or blunderbuss with axe or shortsword.

Fletchers and Bowyers Bow (any kind), broadsword and leather armour.

This force lacks discipline and training so it is supplemented by fixed contract mercenary forces who provide Dunlochs cavalry forces:

THE WOLFPACK these mercs have an awesome reputation. 6 Companies of 120 men armed with lance, broadsword, dagger and shortbow. Equipped with chainmail hauberks and plate helms. Entrants to the pack must prove themselves through killing a grown wolf armed with only a dagger. It’s skin them becomes the mercenaries cloak. (The wolves are now especially grown for this purpose and may not be as formidable as legend suggests.)

THE ONE THOUSAND 10 Companies of 100 glory seeking fighters with a good reputation. Carry lances, kite shield and shortsword. Ride great warhorses in barded armour and the riders are in heavy double chain.

THE NOVAKAN FALCONS 40 Squadrons of 150 men and horses made up of refugees and exiles from the Novakan Republic. United only in their hatred of the junta this mixed bag of Monarchists, Freyorians, Republicans and anti-clericals has 20 squadrons of horse archers and 20 of light lancers.

To supplement the navy the Brotherhood of the Brine a mixed bag of Yesyanolan renegades, Duninaden and Ecotch pirates , Nenetian spy ships and random vagabonds are allowed refuge in Dunloch ports.

Until recently Dunloch was amongst the greatest trading nations in the world supplying arms and armour to the great nobles across the world. Lacking resources a free trade regime was needed to that it’s smiths and craftsmen could get the raw materials they needed. However the new world of Discoverie and with it gunpowder, folding steel techniques and other manufactures of the Jade Coast has led to a decline. Crop blights have compounded the problem.

Technology is high in the civilian sphere with windmills, steel production, irrigation, land reclamation, clockwork all very advanced. Dunloch has not mastered the recipe for gunpowder and is dependent on imports with have discouraged with thrifty guilds from moving to firearms.

Formally only two classes exist in Dunloch the Guilded and Unguilded.  Apprenticeships are available to those who prove literacy and numeracy to Guild Selectors at the test weeks in early spring and are considered suitable for training. Guildsmen’s children have training in Guild Schools – the Unguilded have to compete for charity and church schools.  The Farmers Guild manages huge estates held by that Guild in common but which are worked by Unguilded peasants and tenants.

Once a man has undergone training as an apprentice he spends a year as a travelling journeyman once he produces his masterpiece (for a farmer, fisherman or Seamen this is usually being given a tricky problem to address) and it meets with the Guilds approval he becomes a craftsman and can stand and vote in elections. The path of Chapter, County and Guild Guildmaster is a well trodden one. The Chair of the Grand Council of Guildmasters is the highest in the land. Failed Journeymen form a disgruntled rump in the country acting as hired hands for Guildsmen or go into voluntary exile in Ancienia or Discoverie (ending up in Drakesdoom?)

Laws are enforced by specific Guild militia members on a rota which is the subject of much politicking and haggling. Certain guilds patrol certain districts on certain days. The duty cannot be sold on and failure can result in expulsion. Criminals are tried by the local Guildmaster of the victim or a litigant Guildmaster if unguilded. Litigants also try crimes and civil cases between guilded parties. Punishments vary from guld to guild but are harsher for the unguilded. Guilded persons are usually punished by fines while executions are usually carried out by mercenaries.

This is Dunloch’s seat of government – a three walled city dominated by a 18 story guildhall keep which containes the central copies of all the Guild records. The City is not the economic centre of Dunloch having the atmosphere of a provincial market town. Whilst Guildmasters debate politics in the avenue filled ‘Green City’ their deputies administer day to day business in the busy metropolis of Amsterhague.  Foreign ambassadors base themselves in Hagdam and a small circuit of rogues exist in the suburbs serving their intelligence needs.

Despite it’s larger population in the Green Zone of central Amsterhague their appears little difference between it and Hagdam.  However outsider the inner wall and away from the Guild headquarters and leading guild officals residences the difference is obvious. Amsterhague is riven with beggers, rogues, conmen and opportunists. It’s streets heave with Longshoremen and Teamsters heaving cargos and trade. The inadequacies of the legal system mean Guildsmen houses and places of trade are mini-fortresses leaving the urban predators to prey on their fellow poor. Amsterhague is base of the ‘One Thousand’  but they don’t patrol the town as they keep watch on the east bank of the River Oran to discourage Nushrushan nobles raids on their farms.

Capital for Fisherman, Seamen and Pilot guilds as well as the Brotherhood of the Brine and Novakan Falcons.

A port where the local Seamen’s guild are pushing for expansion of the Discoverie trade.  To this end they are hiring sellswords and giving free passage for their ships they progress to Alfhiem and try to send ships boats via portage up the falls to Lake Hali and the wealth of the Black Alps and Drakesdoom trade.